The screenplay of my first feature film is finished!!! 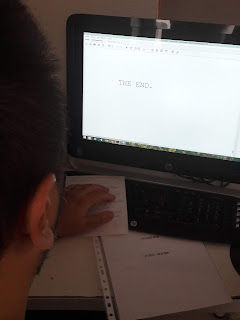 They tried many times to destroy me... Even three years ago they made me failed a short film, by leaving the project just a few days before filming began. The damage has been so big that I still wear scars. I was surrounded by hypocrites, loafers and "fake" professionals of film industry. People whom I've helped and they stabbed me in the back...
Why? Only because thery were jealous! It's been a kind of experience that I would not even wish it to my worst enemy! I tell you the truth: I had almost decided to stop making films! Those of you who know me, know how much I suffered... I was so disgusted!!! Did you enjoy to see me on the floor, right? Of course, one less competitor! It was only thanks to my family and to the big and deep love I have for the cinema world that I could get up... I really sorry for you assholes, but from the ashes I RETURN STRONGER THAN EVER! And as always, I talk with facts: on July 2017 'Lion' was released! Able to win 128 awards all over the world (45 only in Los Angeles), it's become one of the MOST AWARDED HORROR SHORTS IN HISTORY. And this is nothing! Be ready for the release of 'Deep Shock' next year...
But the news certainly does not end here! After two months spent to write almost every night, I can finally say that I finished the screenplay for my new feature film. It's only the first draft, of course, but the joy to finish a big job like that is priceless. I want to thank all people who helped and believed in me and continue to do so.
My success are your success!
Go ahead!!!
Pubblicato da Davide Melini a 21:00